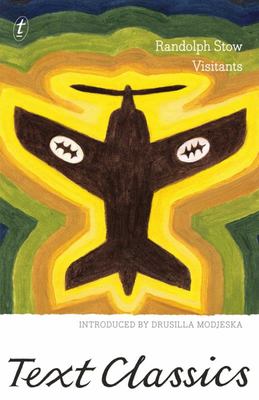 'I want to die. I do not want to be mad...It is like my body is a house, and some visitor has come, and attacked the person who lived there.' After an Australian patrol officer commits suicide on a remote New Guinea island in 1959, five witnesses are called to a government inquiry. Each has a disturbing story to tell: strand by strand, the mystery of the officer's past is unravelled. But what of other visitants, like the unidentified flying object and the cargo cult it has inspired on the island? Informed by Randolph Stow's experiences, Visitants is an original, astonishing investigation of colonialism.

Julian Randolph 'Mick' Stow was born in Geraldton, Western Australia, in 1935. He attended local schools before boarding at Guildford Grammar in Perth, where the renowned author Kenneth Mackenzie had been a student. While at university he sent his poems to a British publisher. The resulting collection, Act One, won the Australian Literature Society's Gold Medal in 1957-as did the prolific young writer's third novel, To the Islands, the following year. To the Islands also won the 1958 Miles Franklin Literary Award. Stow reworked the novel for a second edition almost twenty-five years later, but never allowed its two predecessors to be republished. He worked briefly as an anthropologist's assistant in New Guinea-an experience that subsequently informed Visitants, one of three masterful late novels-then fell seriously ill and returned to Australia. In the 1960s he lectured at universities in Australia and England, and lived in America on a Harkness fellowship. He published his second collection of verse, Outrider; the novel Tourmaline, on which critical opinion was divided; and his most popular fiction, The Merry-Go-Round in the Sea and Midnite. For years afterwards Stow produced mainly poetry, libretti and reviews. In 1969 he settled permanently in England: first in Suffolk, then in Essex, where he moved in 1981. He received the 1979 Patrick White Award. Randolph Stow died in 2010, aged seventy-four. A private man, a prodigiously gifted yet intermittently silent author, he has been hailed as 'the least visible figure of that great twentieth-century triumvirate of Australian novelists whose other members are Patrick White and Christina Stead'.